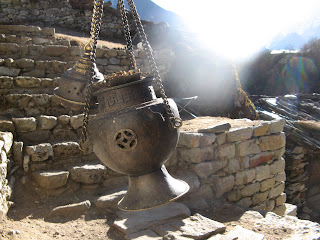 I will not describe here the diary notes of this day. It was long, I was sick, I wonder I could wake up and walk, we started the trail before 9 a.m., but I couldn’t keep close to the others, so I trekked solo again and it wasn’t funny at all for the last 2-3 hours of the day, when I practically collapsed for about 10 minutes.
The main difficulty was my stuffy and bleeding nose and the cough, because you are so high above the sea level and you need your entire respiratory system in order to breathe freely.
I could leave here in the lodge some stuff, alleviating my backpack, this was the best idea. Now I knew I have no choice to return on different route to Namche, I had to reach Dhole again. Normally I always avoid to return on the same route. 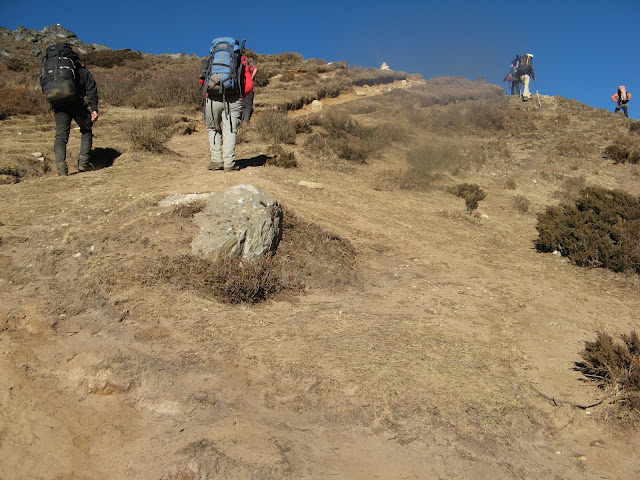 The breakfast at 8 was rather poor – 2 fried eggs on a chapati and two cups of lemon tea -, not much choice in this lodge and for a Sherpa Stew I’d had needed to wait to long, at least half an hours. I didn’t want to miss the start with the others, this was the reason, because I had the feeling it will be a long difficult day. The lodge’s owner said, we could reach Gokyo in about 5 hours, this is meaning seven hours for me. And I wasn’t wrong, I was pretty exact about the tim estimation, as I always am.
The trail begins very steep behind the lodge. But the sun was already arised and this was exceptional good. After about half an hour you reach the top of that hill and in front of you streches a large valley, but you have to follow a narrow path cutting the mountains in after another 30-40 minutes you reach Lhabarma at 4.330 m, a small settlement built against a huge rock. Here, several porters, heavily loaded, took a break and had a chat. Half an hour later it comes Luza (4.340 m), on the banks of a large stream, having a year-round water supply. All the kharkas on this side of the valley are owned by people from Khumjung. Families have houses in several settlements and move their herds from place to place as the grasss becomes overgrazed and the snows melt. I reached Luza about 10 minutes later than the other 3 and the Danish guy was the one who asked in a sort of nervous way what am I intend to do today, because they are not willing to wait for me every time. I reacted very prompt: “OK, just go without me. If everythink all right, we meet tonight in Gokyo. I cannot walk faster. Go and don’t look behind after me!”
http://www.youtube.com/get_player
I lost them shortly because I stopped for some picture and a loaded yak passed in front of me, having other two yaks behind. Normally they are going faster, but not today. The path was much to narrow, so I was blocked between the animals and only after about 20 minutes I found a spot to pass in front of the first yak and to follow my trail without any obstacles. But then I met a local Sherpa man having some troubles with the loading on his yak and I stopped in order to try to help him. As I didn’t was so strong even to move the heavy load, I just try to encourage him and I walked further after I saw he succeded somehow to arrange the load on the animal back and to continue his way in the opposite direction.
The trail continued to climb along the side of the valley, high above the river, crossing sandy spurs to Machhermo at 4.410 m. It was in Machhermo in 1974 that a yeti killed three yaks and attacked a Sherpa woman. This is the most credible yeti incident ever reported in Khumbu, so the people mean you should be watchful as you visit this region. 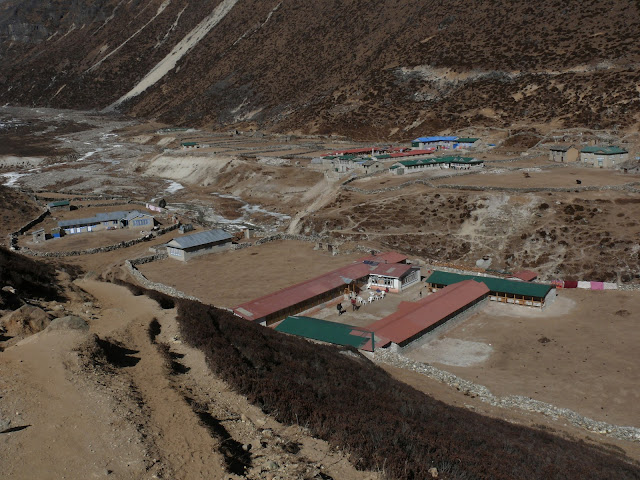 In Macchermo I reached the other 3 guys again, they stopped there for lunch and I did the same. The soup wasn’t good, but it was fluid. The Sherpa stew was also very late and poor, so the person who is cooking is very important, because after all they have the same ingredients.

I was already tired, having the mouth and the nose covered all the time and struggling to breathe is not an easy task over 4.000 m altitude. But you cannot have other expectations from the thin air, when you normaly live close to the sea level, of course. A perfect acclimatisation needs longer time and no other health handicape. If you already caught a cold in Kathmandu, it isn’t a very good idea to go very high. But I was there and very decided to enjoy my experience, doesn’t matter if alone or with others. I started alone, so I took all the risks on me. Don’t expect much from people you are occasionally meeting on the trail, you could be very disappointed when you have expectations. Yes, it is a place for human ethic, but as I tried afterward to find out several opinions, nobody so far agreed that I’d had been helped by others, because it was my own decision to go through this adventure alone and nobody has any reason in the world to be worried about my status there. I am my own responsability.
Maybe a good idea would be to overnight in Macchermo, but I didn’t think about it in that day. To have such a short day, only 2-3 yours on the trail, wasn’t my style, especially after the short day of yesterday. Descending into the valley, you need to climb up again. So, beyond Machhermo the trail climbs a ridge for an excellent view both down the valley to Kantega Mount and up towards Cho Oyu. Beyond the ridge, the valley widens as the trail reaches Pangka at 4.390 m. In November 1995 an entire trekking group was killed here by an avalanche and the three lodges in Pangka are located well away from the old avalanche path which I was walked on. 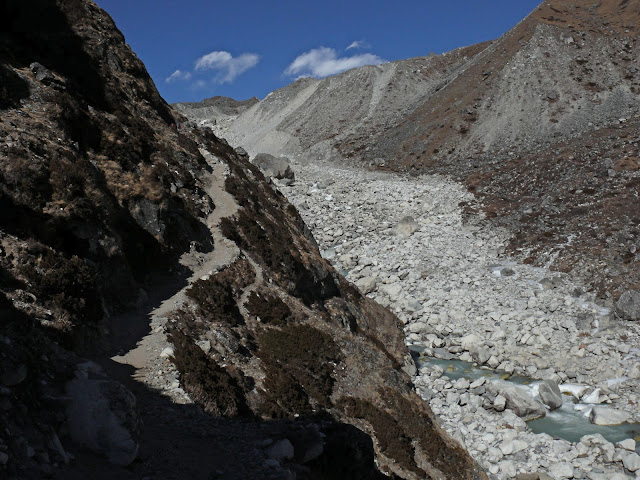 Leaving Pangka the trail drops briefly, then climbs to a large cave area known as Nilibuk. To be very honest, I remember the place, but I do not remember any caves around. I know that I got closer to a very different segment of the trail along the noisy river. The trail climbs steeply along a narrow, newly crafted staircase trail. Below on the right I could see the water coming from faw away on the top and joining with the glacial outflow from the massive Ngozumpa Glacier. Above the trail to the left is a 90° steep ridge that can be a dangerous avalanche area after a storm. 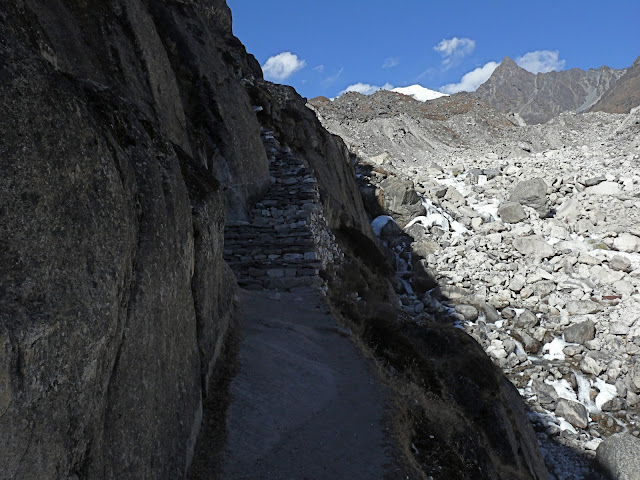 This segment of the trail, on the steep stairs, on a loud background coming from the river on the right, was totally in the shadow at that time – 1:40 p.m. -. I didn’t met anyone for the next 2 and half hours and because of the strong water sound it was quite a creepy time. And this feeling has been extended for the next hours until I reached Gokyo. Climbing all those stairs it takes about 20 up to 30 minutes and you become very curious to see what is next, because you cannot see any end of its. Atop the staircase the trail crosses a simple short bridge to the first small lake and from that moment you enter a total different world!

http://www.youtube.com/get_player
You are at 4.650 m in front of the Longponga first lake – there are 5 lakes and the Gokyo village is at the top of the 3rd lake, Dudh Pokhari, at 4.750 m. The first lake is pretty small, only about 1 m deep, due to the inscription there.
Entering this area is a special moment. The landscape is suddenly so different, the entire area was in full shadow, suddenly it became colder and after I filmed for a few minutes I stopped for getting out my dawn jacket and gloves. On the right side, behind that brown partially rocky ridge, was the longest glacier of Nepal (I even read about it of being the longest of Himalaya), Ngozumpa, which streches for over 24 km. 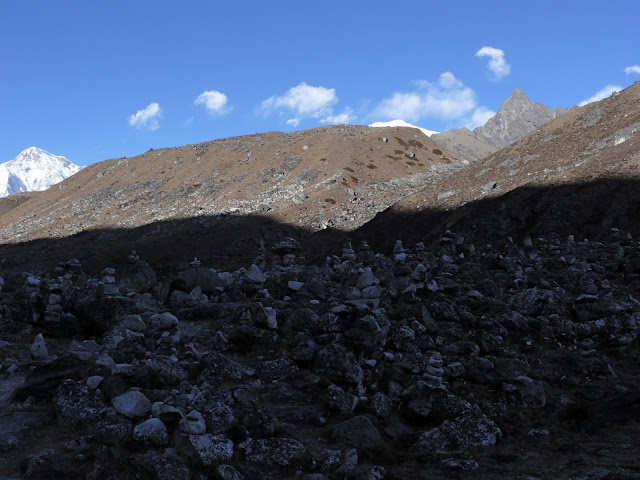 On the first lake I saw a family of Brahminy ducks. Here starts also a different sound background. The lake surface is covered with a thin layer of ice – about 10 up to 20 cm I would estimate – and its forms change. The currents under the ice seem to be strong enough to move the mass of ice, so this doesn’t stay compact, but it cracks, breaks and all these moves ride out some echo sounds along the valley. Everything turns into a kind of movie about moaning, whining, squaling, collapse, fractures. It is like a new language, you are in another world and you want to get to meet something human as soon as possible, at least other people or even the village you’re going to. 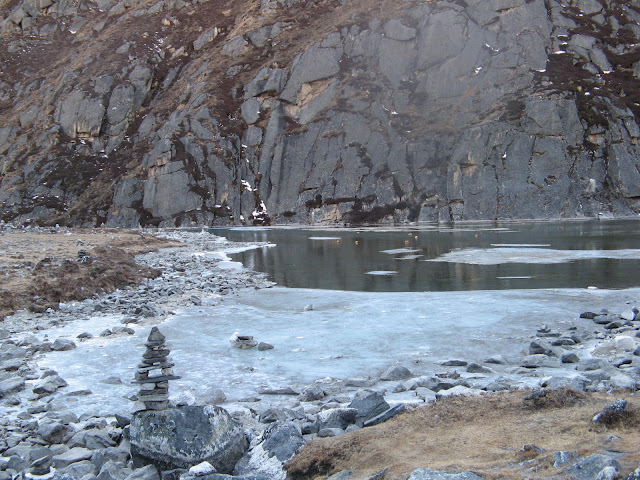 All around you is in a deep cone of shadow, a frozen, gray, cold and partially wet, windy shadow, the trail is running as a thread that never ends and you will not see the length of the valley. All around you are the Himalayan giants. You get close to the biggest, the highest mountains of the planet: the Everest, Makalu, Lhotse, Cho Oyu, Kangchejunga (the 3rd highest mountain with 8.586 m). 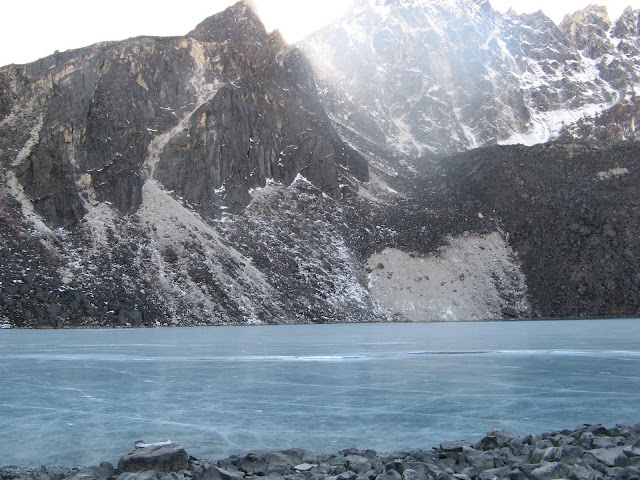 About 20 minutes later I reached the second lake, Taujung Tso, at 4.728 m, larger and much deeper than the first one (about 33 meters), totally covered with ice. I was too tired and frozen, I didn’t enjoy the place. I just wanted to reach a lodge and to feel secure in a way. 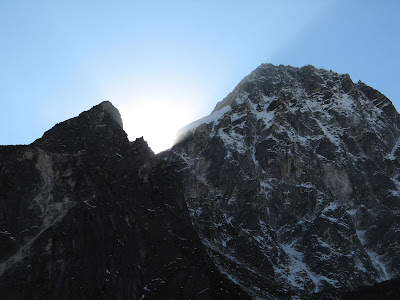 The water was grey, the sun was gone, it was windy, no soul around, no idea about how long I had to walk. I crawled through the shadowed, empty, cold valley and the lake kicked and moved and the path in front of me did not seem to have any end. I knew I can still walk for one or two hours, but not enjoying the time. I still could walk in a sort of mechanical move. 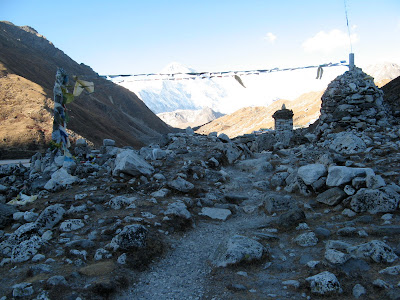 When the third lake appeared and I still could not see any sign of human settlement, I felt getting very closed to a collapse. And I collapsed. As I saw the small collection of the blue roofs of some lodges, far away in front of me at the top of that large and long lake, I knelt, I removed my backpack and I started to cry, hardly breathing because of the cold air, flu and because of the intensity of my emotional discharge. I was on the way only for 7 hours after all, but ….

But the collapse occurred on an inner background which terrible hurte and hang heavier than my backpack: the fact that none of the three people that started today together having the same trail and the same destination hasn’t turned their head to see what is happening with me, lonely in that wildness. The fact that, as I heard after fifteen minutes when I entered the dinning hall, they saw me through the large windows making my slowly appearance in the cold sunset and none of them was turning out to come and help me. They have arrived here one hour earlier than me. Because of this I snapped, because I expected something from somebody. It is very painful, in my acceptance, to see the lack of humanity of the human beings. I already knew, due to my life, that it is silly to expect certain things from people around you, but I will never be able to accept this reality.
next day —>