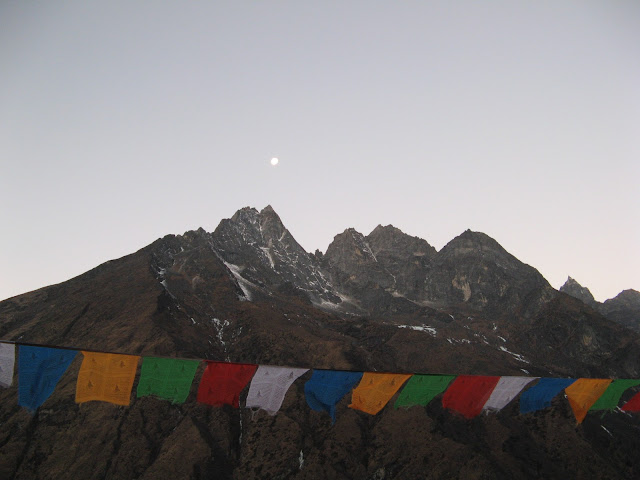 Yesterday evening we agreed to start later today and to do a shorter trek. It wasn’t possible to reach Gokyo today after such a long trek yesterday, you need at least 10 hours to Gokyo. I could sleep for a short while, but not enough. I visited the toilet about 4 times over the night, it was a wonderful night, a big almost full moon, a huge mountain in front of the lodge, stars, quiet. Amazing time, a total different dimension of life. The bad news – no news actually – is that I loose more blood from the nose, having bigger breath problems because of my stuffy nose and cough and an unexpected specific body problem occurred this morning.
I had a big breakfast at 9:30, very late: hash brown with cheese and Sherpa stew. In the dinning room were four Tibetan monks chanting. 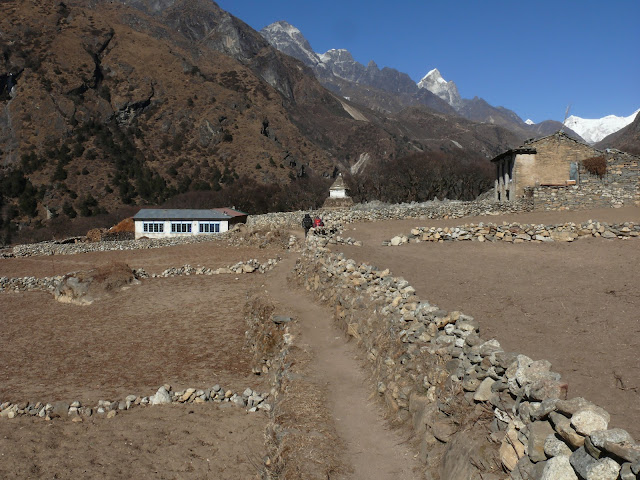 We left Dhole at 10:15, pretty enthusiastic. We talked about reaching at least Nha (4.400 m). We crossed the descending village, it was very sunny. Cold but sunny. I could see the settlement entirely, a very simple, but interesting corner in Himalaya, fixed into a nice terraced valley. It is interesting to see how these people choose their places to live and as I already observed two years before, in a different part of Nepal, the big surprise for me was to see how intense populated is the land of Himalayas, how many small settlements are so close to each other, only 2 up to 3-4 hours walking distance. The only notable difference from Annapurna Range is that I didn’t meet children and I only can think about the fact they are coming in the highlands only during the warm season, the rest of the year they are sent to live in lower regions, to relatives. It was a really challenge to find children for giving them the toys I am carrying with me, I still have 3 pieces of it hanging on my backpack. 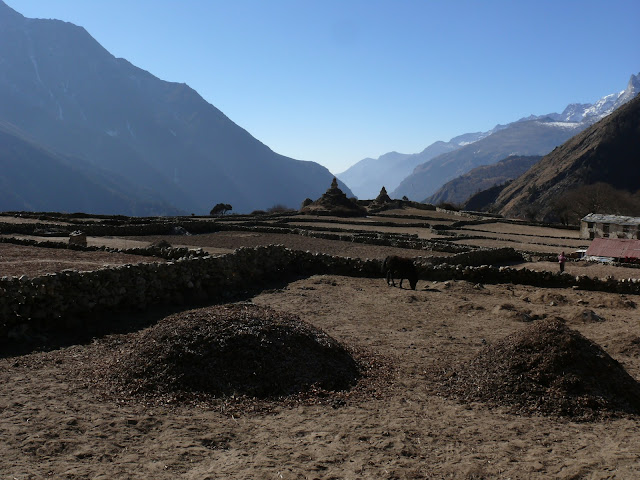 It was a cold morning, of course. Peter fell because the ice under the thick dust. The descent until the forest took us about 5 minutes, then we entered a forest and the difference of 250 meters in altitude meant another 15 minutes of going down to the Dudh Koshi River. We stopped there to adjust our clothes to the huge steep climb of the hill on the opposite site of the river. We saw only a crazy path going straight up through the forest and we followed it, it seemed not to have a second choice. And it was crazy indeed. For almost one hour I experienced the steepest, longest, coldest and tightest forest climb I remember. Every step was like when the knees are touching my chin – of course it is a little bit of exaggeration here, but I do appreciate a hill inclination of 70⁰. We knew that we probably took a shortcut because we didn’t find the normal route in order to reach the main way to Dhole. 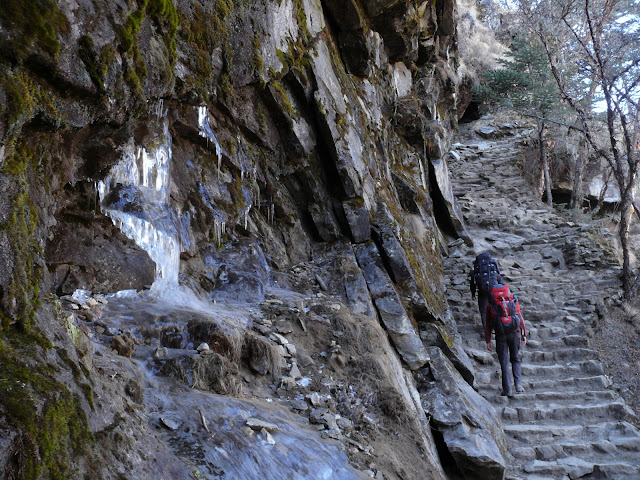 There are two possibilities to reach Gokyo from Phorse: one is to cross the river and to go on its left side, the other one is exactly parallel one on the right side of the river, but the British couple was afraid to choose that thinking that maybe we don’t find open lodges for overnight.
We reached the main route, this is meaning following a larger way through the same cold forest, alternating the dusty path with long steep and high rocky stairs through icy waterfalls. Because everything was in the deep shadow and there were many long frozen waterfalls the hours on this segment were particular cold, varying between minus and plus degrees. We met about four short, but enough dangerous frozen rivers coming from the high mountain which framed the left side of the path. Dangerous because you can slip so brutal on these segments of ice. 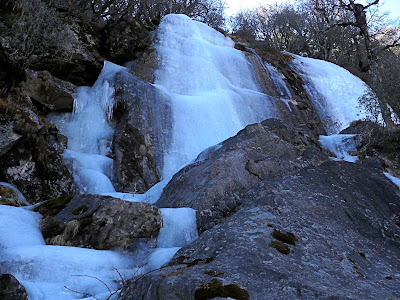 40 minutes from our river cross we met a local guide accompanying an older American couple. He said us, we need about 45 minutes longer to reach Dhole. Again that sort of Nepali time, because we reached Dhole after one hour and half only, at 1:30 p.m. Although the shortest trek day, it wasn’t easy for me. Not only the heavy backpack, but a terrible headache and the stuffy nose disturbed me very deep, every step was a new suffer. In Dhole we entered the first lodge for a drink and we also ordered a Sherpa Stew. It took long time, half an hour. It was very early indeed for staying here, but the last three hours were pretty tough for all of us, so we were very unsure about what are we intend to do. In the dinning room were three Indian people with their guide, they stopped here for the night. The guide told us that the next village, Maccherma (4.470 m) is about 3 hours away and the route is the same exhausting.
To be on the way at 5 p.m. wasn’t very appealing to us and we all agreed to celebrate Christmas Eve in Dhole, but to go in the valley to the next lodge. We already climbed about 500 m altitude today, it was more than recommended on highlands. Additional surprise was to see the sunset at 2:30 p.m.! All around was swallowed by the shadow and frozen cold. We choose Yeti Inn Lodge and I lied in my sleeping bag in the dinning room for three hours, getting high fever. I was official sick.
About six o’clock I collect all my positive efforts to enjoy the evening. The sympathetic owner of the lodge has a very small, sweet, full of energy, white little dog and this was like a Christmas present for me, I spend some enjoyable hours with the dog and writing my diary. There were another 3 Polish men going to Island Peak, two Germans and us. One of the German guy went outside and “had a bath in basin”, terrible thing or I was to sick.
I 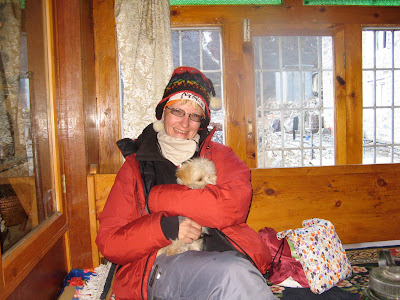 shared with everybody – about 10 persons – the small halvah package (500 g) I carried with me from Bucharest especially for this evening, it was very nice.
Tomorrow will be a tough day again, as we have an altitude gain of about 600 meters and start already at 8 a.m., this is meaning to wake up at 6,30 in the morning. I asked the lodge owner if it is possible to let here a part of my luggage, about 3 up to 5 kg probably, as I return in 2-3 days here. So, this was a very good solution and I gave up all medicine and other stuff I could miss for 3 days.
The best sign of the evening, besides I was sick, was the fact I had appetite. This is very important and a sign you don’t have altitude sickness. I took two paracetamol and I went to bed in the cold room, leaving the rest of them in the warm dining room. 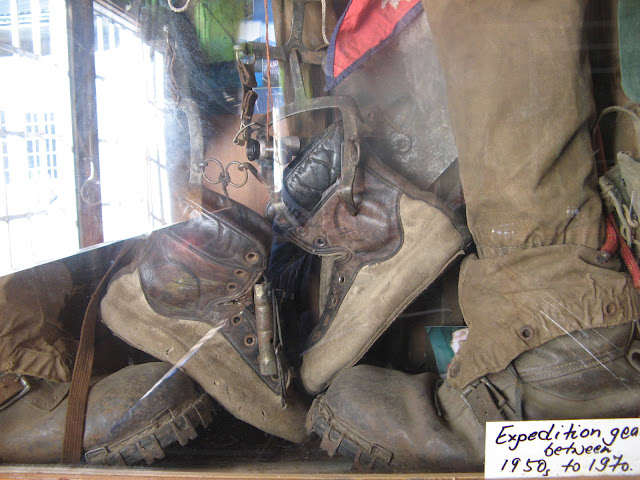 This is old expedition gear used for climbing also the Everest by the lodge owner’s father who climbed with Sir Hillary. The owner himself never wanted to do climbing despite the will of his father. Very nice family here, I felt very well this evening.
Merry Christmas!
27.980799 86.920769